I am a glass half full kind of person.  I always see the positive, bright, sunshiny side of everything.  I cherish all of the amazing sweet memories from my past but live for now and the future.  So today, Mother's Day, I'm sharing one of those sweet memories but also sharing the awesomeness of today.

First, the memory of my own mother who passed away almost 10 years ago.  She was the ultimate mom.  She did it all...took us to piano and dance lessons, was a PTA room mother, sunday school teacher, attended every event we participated in, went up to my high school to argue their decision not to put me on drill team the first time I tried out (that was embarrassing), dressed us in boutique clothes, gave us everything she could both materialistically and morally and loved us to death.  We (my sister and I) were her life.  My mother wanted nothing more in this world than to be a mother but had a difficult road to get there.  She was lucky enough to give birth to one child.  If you saw her with us, you would never know which one was adopted.  If you ask my family, they probably have forgotten which one was adopted.  Ask me about what adoption is like and I can't answer because I don't know what that feels like...yet it was me.  I was adopted...or so they tell me.

In my house, a lot of my special touches are meaningful things for me.  I like to have things around my house that have special meaning or bring back those wonderful memories of my life.  When I had the difficult task of cleaning out my parent's house and going through their things, I found a little piece of a newspaper clipping folded up in my mom's Louis Vuitton wallet (she was stylish too!). It was a poem I'm told she carried with her at all times from about the time I was born. She had written my name "Gina" on the side of it.  The paper was so fragile that I quickly typed up it's contents before it was lost and then framed it.  It was so important to her to carry all those years, then it deserved to be framed and with me from now on. 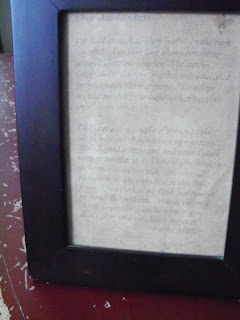 Not flesh of my flesh
nor bone of my bone,
but still miraculously my own.
Never forget for a single minute,
that you grew not under my heart,
but in it.
Author Unknown
Okay, now on to the awesomeness of today!  I am not one of those who loves to receive a lot of flowers, chocolates or clothes.  When it comes to personal gifts, I'm not materialistic and really would rather have something that is really special.  My son really gets that and always has.  Most of his gifts to me have been poems he's written, artwork he has done or things he has made.  Here is one of most favorite gifts he gave me for Mother's Day when he was seven. 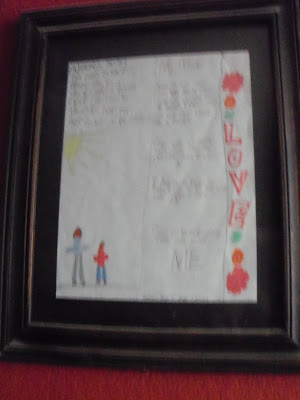 I know, bad picture, but I wanted to show that I framed it and it's art in our master bedroom.  (Someday, I'll show you the other art in our bedroom.  It was all done by him.) 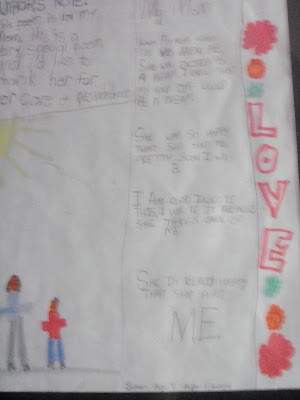 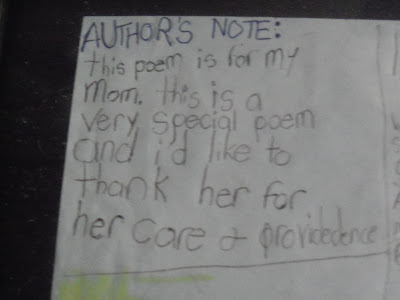 Yes, I have given him good "providedence."  Apparently, he appreciated at age seven how well we had provided for him.  This just makes me chuckle each morning when I wake up to it.
So, what did I get today? 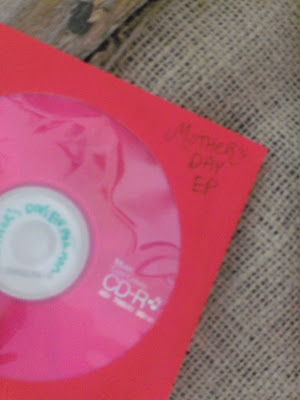 He recorded a special cd for me with some of my favorite music from him.  He recorded some songs he wrote just for me or songs he's done that are my favorites as well as some songs he thought I would like.  Pretty cool, huh?  How many of you got that? 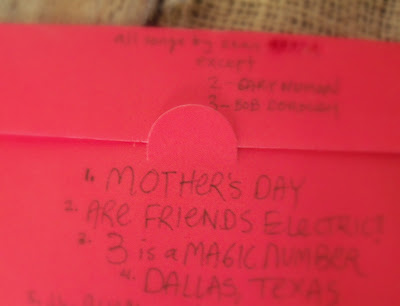 He even recorded it on a red cd and put it in a red cd cover because he knows red is my favorite color.  He's 13 and he's got to be the coolest kid ever!  I had a fabulous Mother's Day today.
I hope you all did too.